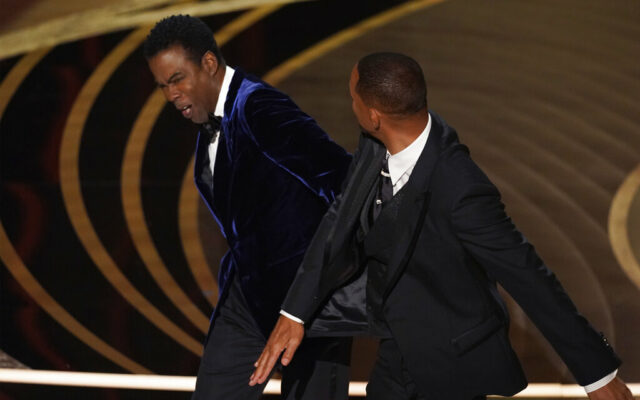 Will Smith, right, hits presenter Chris Rock on stage while presenting the award for best documentary feature at the Oscars on Sunday, March 27, 2022, at the Dolby Theatre in Los Angeles. (AP Photo/Chris Pizzello)

Will Smith, Chris Rock Confrontation Shocks Oscar Audience Will Smith apologized while giving his speech for Best Actor at the Oscars on Sunday night after he slapped Chris Rock on stage.  Rock had made a joke about Jada Pinkett doing a sequel for G.I. Jane, possibly not knowing the actress suffers from alopecia.  Will came to the stage and appeared to slap Chris, then he returned to his seat where he cursed at Rock, telling the comedian to “keep his wife’s f___n name out of your mouth.” During his Best Actor acceptance speech, a tearful Will Smith apologized to the Academy, and to the audience saying he is being “called to protect people.” Do you think Will Smith slapping Chris Rock was justified?