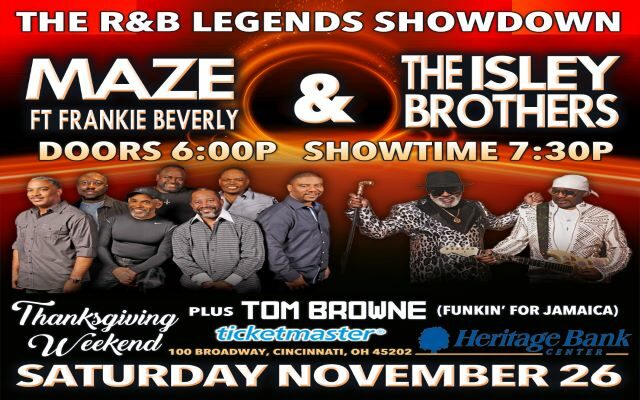 During the pandemic the versus battles kept us as close to live concerts with our favorite artists as we could get.
Now, that we are back “outside,” A HUGE showdown is on the way to Ohio!
Two of the biggest names in R&B and Soul music are set to take the stage Thanksgiving weekend in Cincinnati at The Heritage Bank Center and every seat will sell out.

The Isley Brothers who are from Cincinnati (Lincoln Heights) will most defiantly come home and leave the stage on fire with our favorites from “Who’s That Lady” and “Make Me Say It Again Girl” to “Summer Breeze” and everything from “Mr. Biggs!”

However, Maze Featuring Frankie Beverly have appeared annually at The Cincinnati Music Festival and are the festival’s signature closer. I believe they will deliver the more than 40 years of hits as well!
“Southern Girl” “Joy and Pain” and “Golden Time of Day” are expected to rock the crowd.

What’s your favorite from The Isley Brothers? What about Maze?

You have got to be there!
What: The R&B Legends Showdown
Who: The Isley Brothers VS Maze Featuring Frankie Beverley
Where: Heritage Bank Center, Cincinnati
When: Saturday, November 26th
Tickets: www.ticketmaster.com