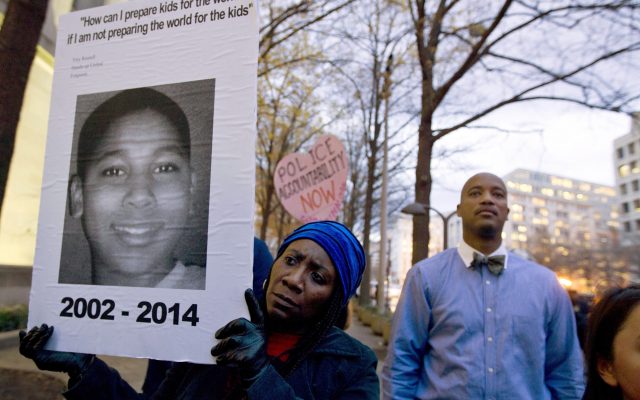 FILE - In a Monday, Dec. 1, 2014 file photo, Tomiko Shine holds up a picture of Tamir Rice during a protest in Washington, D.C. A gazebo where Rice, a 12-year-old black boy with a pellet gun was fatally shot by a white Cleveland police officer, is expected to be dismantled beginning this week and shipped to a Chicago museum for display. The gazebo became a makeshift memorial to Rice, whose 2014 death sparked Black Lives Matter protests. An attorney says Tamir's mother wanted the gazebo to become a symbol for what happened to him. Ex-city councilman Jay Westbrook said Monday, Sept. 12, 2016, he's been coordinating the deconstruction with officials at Chicago's Stony Island Arts Bank. He says a museum official will supervise the deconstruction, scheduled to begin Wednesday. (AP Photo/Jose Luis Magana, File)

Family Asks Feds To Reopen Case on Tamir Rice Police Killing The family of Tamir Rice is asking the Justice Department to reopen his case. Tamir Rice was the 12 year old boy who was shot and killed by police in Cleveland in 2014. He was playing with a pellet gun cops thought was a real gun. At the time, the Feds said they would not bring charges against the two officers involved saying the video of the shooting was too poor of quality. A grand jury also declined to bring criminal charges against the officers involved Tamir’s case was closed toward the end of the previous administration. The family is now hoping the new administration will reopen the case.