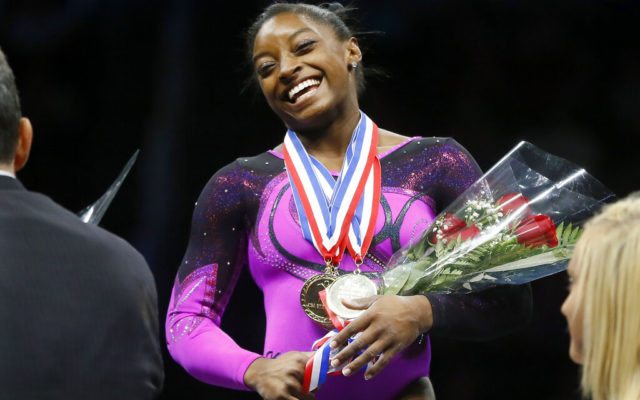 FILE - In this Aug. 23, 2014, file photo, Simone Biles smiles after getting her gold medal at the gymnastics U.S. Championships in Pittsburgh. There’s money to be made if you end up standing atop the podium at the Olympics with “The Star Spangled Banner” playing and your sport’s most coveted prize draped over your neck. (AP Photo/Keith Srakocic, File)

Simone Biles Wins 7th U.S. Title, More Than Any Woman In History Is there anything she can’t do?! Simone Biles won her seventh U.S. title on Sunday at the U.S. Gymnastics Championships in Fort Worth, Texas — that’s now more than any woman in history. The 24-year-old has won every all-around competition she’s entered since the 2013 U.S. Championships. Biles called the history-making weekend “emotional” and “really crazy.” She also had the highest combined scores on beam, floor exercise, and vault. Up next: the Olympic Trials June 24-27 in St. Louis. Is there any doubt that Biles won’t come home from the Tokyo Summer Olympics with another suitcase full of gold medals?