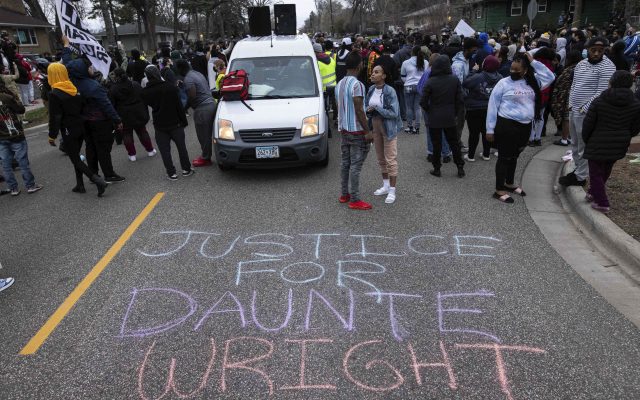 People gather in protest, Sunday, April 11, 2021, in Brooklyn Center, Minn. The family of Daunte Wright, 20, told a crowd that he was shot by police Sunday before getting back into his car and driving away, then crashing the vehicle several blocks away. The family said Wright was later pronounced dead. (AP Photo/Christian Monterrosa)

Police Chief Claims Cop who Killed Daunte Wright Meant to Fire Taser The Minnesota police officer who killed Daunte Wright Sunday meant to shoot him with her Taser — and not her handgun. That’s the word from Brooklyn Center Police Chief Tim Gannon, who’s calling the incident a case of “accidental discharge that resulted in a tragic death of Mr. Wright.” Body camera footage released Monday appears to support Gannon’s explanation, as the officer can be heard shouting “Taser” several times before shooting the 20-year-old. Despite Gannon’s revelation, the state Bureau of Criminal Apprehension has launched an investigation into the officer’s actions, according to a bureau rep. Sunday’s incident sparked a night of protests in the area, just one day before the trial of Derek Chauvin — the cop accused of killing George Floyd — began its third week in Minneapolis. Do guns and Tasers look and feel alike? If they do, isn’t that a big problem?