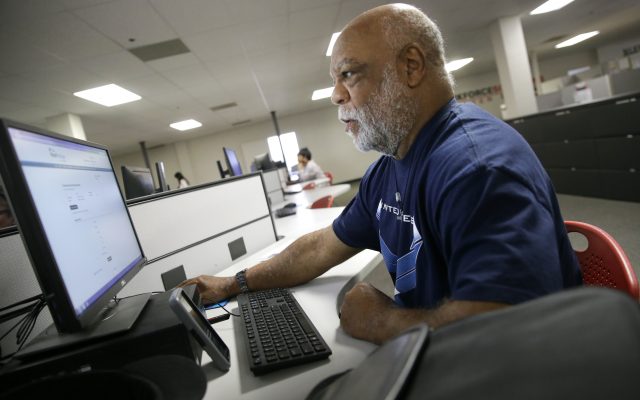 Air Force veteran Thom Brownell uses a computer to search for a job at the Texas Workforce Solutions office in Dallas, Friday, March 10, 2017. U.S. employers added a robust 235,000 jobs in February and raised pay at a healthy pace, making it all but certain that the Federal Reserve will raise short-term interest rates next week. Friday's jobs report from the government made clear that the economy remains on solid footing nearly eight years after the Great Recession ended. (AP Photo/LM Otero)

FBI Warns Of Scammers Offering Fake Job Listings Millions of people who lost their jobs during the pandemic are searching for work – and unfortunately, there are scammers taking advantage of that. The FBI is warning Americans to look out for fake job listings posted by scammers who impersonate real employers. The scammers might try to steal personal data, credit card information, or try to sell the victim bogus job services.  More than 16,000 such scams were reported in 2020 alone. The FBI reminds people that employers typically request bank information after you’ve been hired, not before. Why do people get taken in by these job scams?  Do you consider yourself pretty good at sniffing out hoaxes?