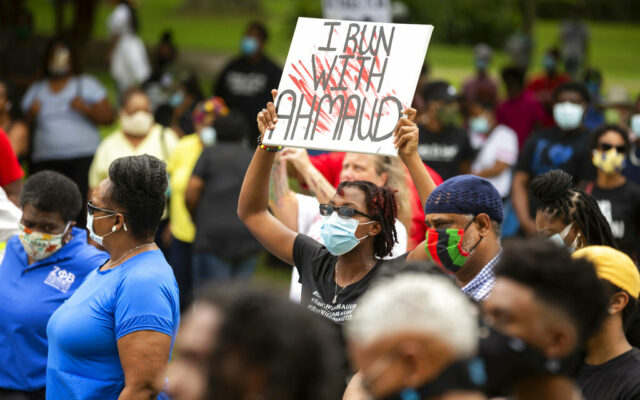 FILE - In this May 16, 2020, file photo, a woman holds a sign during a rally to protest the shooting of Ahmaud Arbery, in Brunswick, Ga. Arbery was shot and killed while running in a neighborhood outside the port city. Jury selection in the case is scheduled to begin Monday, Oct. 18. (AP Photo/Stephen B. Morton, File)

Jury Selection Begins In Trial Over Ahmaud Arbery’s Death Jury selection is set to begin Monday in the trial of three men accused of killing Ahmaud Arbery. Greg McMichael, his son Travis McMichael, and William ‘Roddie’ Bryan are charged with murder, false imprisonment, and other crimes in the death of Arbery, a 25-year-old Black man who was shot while out on a jog. The defendants claim that Arbery was a burglary suspect and that Travis shot him in self-defense while attempting a citizen’s arrest.   The story gained national attention after video of the confrontation, recorded by Bryan, went viral. Jury selection could take up to two weeks, with as many as 600 potential jurors reporting on Monday. Do you expect this trial to be as high-profile as the Derek Chauvin trial earlier this year?