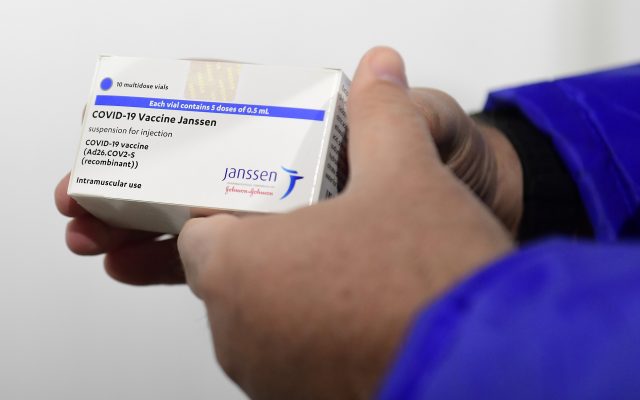 A box of Janssen vaccines is shown by pharmacist Zsolt Szenasi at a warehouse of Hungaropharma, a Hungarian pharmaceutical wholesale company, in Budapest, Hungary, after the arrival of the first batch of the Johnson & Johnson, US, made one-dose vaccine against the new coronavirus in the country Tuesday, April 13, 2021. The first shopment contains 28 thousand doses of Janssen. (Szilard Koszticsak/MTI via AP)

What To Watch For If You’ve Had The J&J Vaccine The Johnson &amp; Johnson vaccine has been put on hold after reports of rare blood clotting issues.  But what about those who already got their shot? First off, the experts say the risk is very low – only six cases out of 7 million patients have been reported so far.  If it’s been more than a month since your shot, you’re probably fine. Symptoms to watch out for include a headache that won’t go away, severe abdominal or leg pain, or shortness of breath.  If you experience any of these, contact your doctor immediately. So far, all six cases have been reported in women between the ages of 18 and 48. Which vaccine did you receive?  Did you seek out a specific one, or just go with whatever was available?