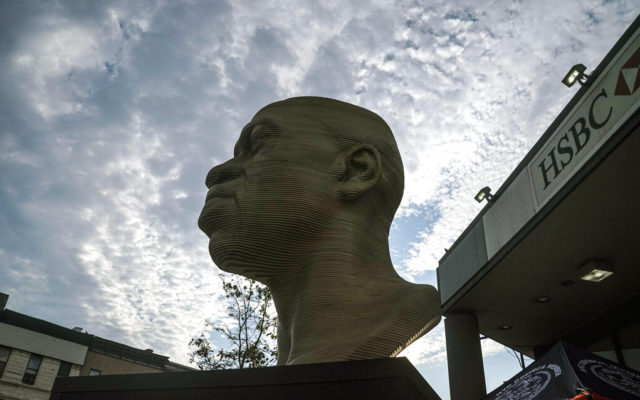 The refurbished George Floyd statue is unveiled during a celebration ceremony, after it was vandalized following its Juneteenth installation, Thursday, July 22, 2021 in the Flatbush section of the Brooklyn borough of New York. Councilwoman Farah Louis said "this culminating ceremony thank the Flatbush community for having the statue here to educate people on systemic racism" and for coming to together to restore it. (AP Photo/Bebeto Matthews)

George Floyd Statue In NYC Vandalized Two Days After Unveiling A statue honoring George Floyd in was vandalized just two days after being unveiled in New York City’s Union Square. Police say video footage shows a man on a skateboard throwing blue paint onto the statue around 10am Sunday morning. The statue was unveiled in Union Square on Friday, alongside statues of Breonna Taylor and John Lewis in an exhibition titled SEEINJUSTICE.  The other statues were unharmed. Why does it seem like George Floyd memorial attract so much attention from vandals?  Should the city take extra security measures?