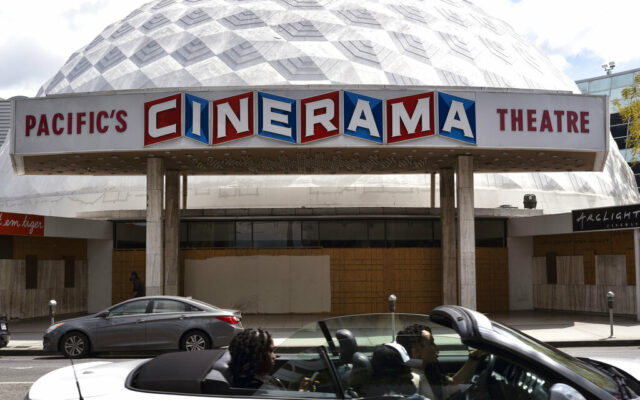 Motorists in a convertible drive past Pacific's Cinerama DomeTheater along Sunset Boulevard in the Hollywood section of Los Angeles on Sunday, April 25, 2021. Hollywood's theatrical business may be slowly rebounding but for some exhibitors the last year has been catastrophic. Pacific Theaters, which operates some 300 screens in California, including the beloved ArcLight theaters and the historic Cinerama Dome in Hollywood, said that it will not be reopening. (AP Photo/Richard Vogel)

$3 Tickets for National Cinema Day! Expect to save some money at the movies next week! Saturday, September 3 is National Cinema Day and plenty of movie chains are getting into the spirit with ticket deals. Regal, Cinemark, AMC, and even IMAX will participate with $3 ticket sales for the new holiday. You can check out participating movie theaters now at NationalCinemaDay.org! Are you planning on going to the movies that day? Do you think you’ll be going to movie theaters more often after the pandemic?