Body cam footage of Andrew Brown shooting will not immediately be released to the public, judge rules 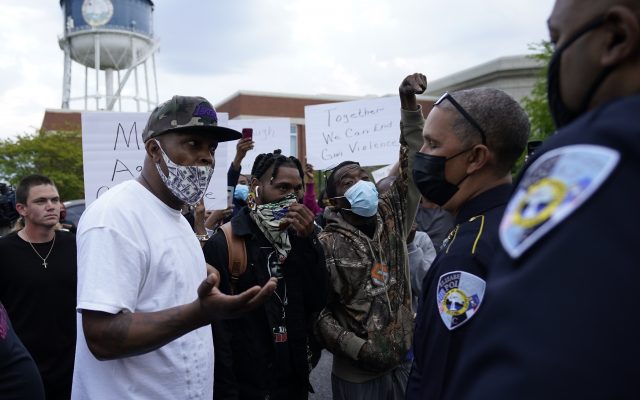 People speaks with Elizabeth City Police Chief Eddie M. Buffaloe, Jr., outside the municipal building after at least one Pasquotank County Sheriff's deputy shot and killed a Black man, Andrew Brown Jr., while executing a search warrant, the sheriff's office said, Wednesday, April 21, 2021, in Elizabeth City, N.C. The deputy was wearing an active body camera at the time of the shooting, said Sheriff Tommy Wooten II, who declined to say how many shots the deputy fired or release any other details, citing a pending review by the State Bureau of Investigation. (AP Photo/Gerry Broome)

Judge Won’t Release Body Cam Footage Yet A judge is not allowing body camera video showing North Carolina deputies shooting and killing a Black man, to be released.  Judge Jeffery Foster ruled today that making the video public right now could jeopardize the investigation into Andrew Brown Jr.’s death.  Foster did order authorities to allow Brown’s family to privately view the videos, with some parts blurred.  He says the video must remain out of public view for at least 30 days, but claims he will consider releasing it after that if the investigation is done.  Do you feel the need to see the video?

Grammys Moving To Vegas In April