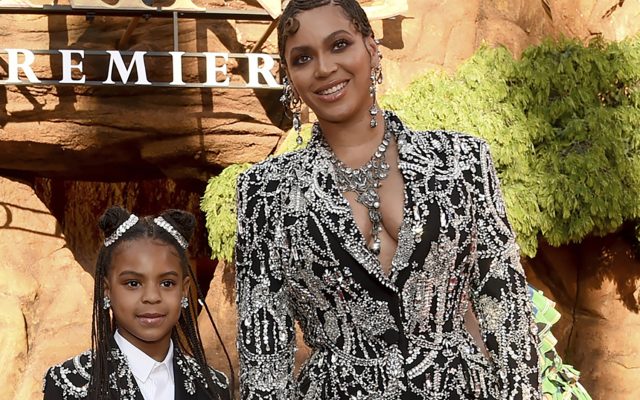 FILE - Beyonce, right, and her daughter Blue Ivy Carter arrive at the world premiere of "The Lion King" in Los Angeles on July 9, 2019. Blue Ivy's name was added to the nominee list for best music video for her mother's "Brown Skin Girl." (Photo by Chris Pizzello/Invision/AP, File)

Beyonce’s Daughter Blue Ivy, Nine, Sports Straight Hair For Lunch At Celeb-favorite Nobu In Malibu Beyoncé stepped out for lunch at Nobu with Blue Ivy on Wednesday (March 31st).  The mother and daughter were spotted leaving the celebrity hotspot and getting into their vehicle.  Blue Ivy’s hair was straightened with a part down the middle. She wore a denim jacket, blue mirrored sunglasses, and a printed facemask while her mother wore her hair in long curls with white mirrored sunglasses.  Earlier Beyoncé was seen enjoying the beach with Blue Ivy and her twins, Rumi and Sir Carter, 3.  How old should a girl be to wear her hair straightened?